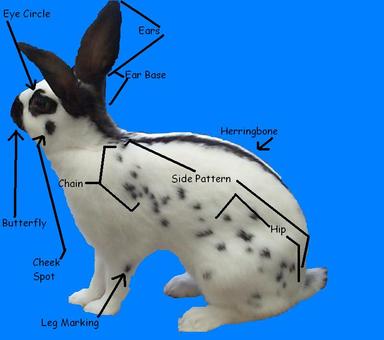 
Head Markings:  The head is to be free of any stray spots.  Disqualify for any connection between markings, more than one stray head spot.  Smudgy markings between the ears or a dirty ear base are not to be considered spots.

Butterfly: The nose marking is to be in the shape of a butterfly.  The wings should be well rounded and circle the nose from lip to lip.  The butterfly's body, or nose fork, should be in proportion to the wings and extend approx. 1/4 inch toward the forehead.  The butterfly should be faulted for irregularly shaped wings, drags of color, runs of white, nose fork out of proportion, or blunt/crooked/off centered nose fork.  Disqualify for split butterfly or white spots in the butterfly.

Cheek Spots:  The cheek spot is a round spot of color on each side of the head directly below the eye circle, on the whisker bump.  Any other placement is considered a missing cheek spot.  Ideally the cheek spot should be 3/4 inch in diameter.  The cheek spots should balance with the other head markings and be well separated from them.  Fault for cheek spots being too large, not balancing, or misshapen cheek spots (bars instead of spots).  Disqualify for double cheek spots, split cheek spots, or either cheek spot missing.

Ear Markings:  The ears should be colored completely.  The color should be a sharp cut at the ear base, not ragged.  Fault for a dirty ear base, white hairs running up the ears, mealiness, frostiness, or ears being too light in color.  Disqualify for white in the upper half of the ear.

Herringbone/Spine Marking:  The herringbone is a strip of color running from the base of the ears to the tip of the tail.  It should broaden out at the beginning of the saddle, with the widest portion above the point of the hips, then narrow toward the tail.  the edges should show a herringbone effect, which are ragged spikes.  The width should be in proportion with the rest of the markings.  Fault for any break in the marking, smooth or even edges.  Disqualify for more than one break (including a late start, but excluding weak tail color) and any break that exceeds 1/4 inch.

Side Markings:  The chain, body, and hip markings for the side pattern.  The chain starts at the nape of the neck with one small spot and goes downward toward the stomach, increasing in number and size of spots.  The body markings connect the end of the chain to the hip markings.  They should sweep up towards the spine marking and should be larger than on the chain.  The hip markings are on the hindquarters.  They should come up toward the spine marking, but not touch it.

Side Pattern/Sweep:  Formation of the side pattern is important.  It's made up of the chain, body, and hip markings.  The side pattern is to be an unbroken flow of distinct spots.  There should not be any gaps or congested areas.  The pattern should have a graceful sweep starting with the chain, arcing down to the body, then sweep up to the hip markings.  The pattern should be open and evenly distributed with distinct separation of spots.  Fault for the sides not showing proper formation of the side pattern, lack of sweep, stray spots outside the pattern, congested or plain sides, gaps in the pattern, blotchy, barred or connected spots.  Fault severely for feathered pattern.

Graduation:  The spots on the sides should increase in size through the entire pattern with the largest spots on the hip.  Fault for no graduation or poor graduation.

Belly/Teat Spots:  These six spots are desirable, but the absence of them does not disqualify.  A stripe of color down the center of the belly is permissible, but not desirable.

Leg Spots:  A spot on the elbow of each front leg and on each rear leg, at the hock, is desirable, but the absence does not disqualify. 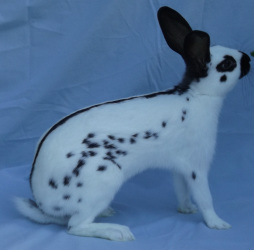 English Spots are a full arched breed.  They should carry their bodies well off of the table.  They should show a good arch from the nape of the neck to the hindquarters.  The hindquarters should be well rounded, not flat, chopped, or pinched.  The legs should be long and slender, allowing daylight to show under the body.

In order to be judged properly, the English Spot should be allowed to run freely on the table.  Video by Heather Dunaway. 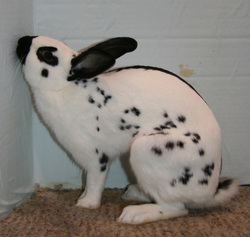 Black: The color is to be intense, very glossy black, running deep toward the skin, turning into slate blue undercolor next to the skin.  The eyes are to be dark brown.  This color should be faulted for stray white hairs, mealiness, rustiness, brown or any other tint, and undercolor other than what is called for. 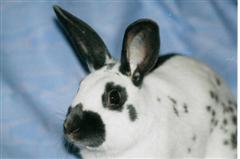 Blue: The color is to be a rich, clear, glossy, dark blue that runs deep toward the skin, blending to a slate blue undercolor.  Eyes are to be blue-gray.  This color should be faulted for faded or light color, mealy appearance.  Also, fault severely for brown tinge or stray white hairs. 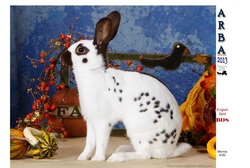 Chocolate: The color is to be glossy, dark chocolate brown, that runs deep toward the skin, blending into a dove undercolor next to the skin.  The eyes should be brown (ruby cast permissible).  Fault for faded, mealy, or lighter color that called for.  Fault severely for rusty tinge, sunburned, or stray white hairs. 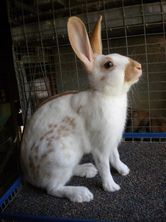 Gold: This color is to be a very glossy, bright, lustrous, clean gold color.  All markings are to be the same color, except the eye circles, which may be lighter.  Golds should be FREE FROM smut or shading.  The color should run well down the hairshaft to an off-white undercolor.  The eyes are to be brown.  Golds should be faulted severely for any shading or smut.  Golds should also be heavily faulted if they are frosted or washed out in color. 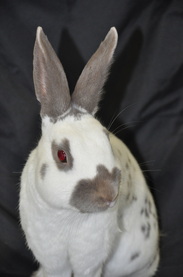 Lilac: This color should be a medium, dove gray with an even pink tint on the surface.  The color must be carried down the hairshaft to a slightly paler undercolor.  The eyes are to be blue-gray, ruby cast permissible.  Lilacs should be faulted for showing blueness, mealiness, white silver tipping, or patches of rust. 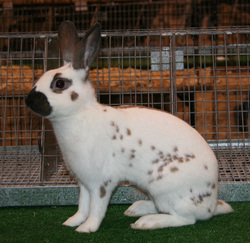 Tortoise: This color should be a bright orange on the markings located on the top line and halfway down the flanks.  It should be a smoke-gray color on the markings on the lower flank and haunches.  The head markings should have the darkest shading, especially the butterfly and ears.  The eye circles and cheek spots should have lighter shading.  All shading should permit the orange undercolor to show through, to avoid intense dark markings.  The eyes should be brown.  Torts should be faulted for shading that does not allow orange color to bleed through, faded color on the top line.  Torts should be disqualified if they have any shading other than what is called for, or lack of shading.

The only Tort shade that is showable is Black Tort.